Choose one or both: 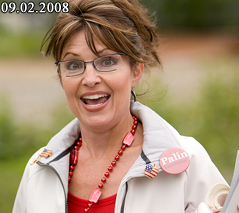 2. Sarah "Talibunny" Palin, Governor of Alaska and candidate for Vice-President of the United States, who asked the head librarian in Wasilla, AK what she would think of the idea of being asked to remove books from the library. Not once, but three times. The librarian, Mary Ellen Emmons, said she would fight such a move, and eventually Palin asked for her resignation. Palin relented when there was a public outcry.

There are some obvious similarities between al-Lihedan and Palin. They are both very influential people in oil-producing states, and they both have good connections to the Bush family.

There is one very important difference, however. Palin, who wears her Dominionist religious beliefs on her shirtsleeves, will be required, if she is elected Vice-President, to put her hand on a bible and swear to preserve, protect and defend the Constitution of the United States.

It would be a good idea for somebody to read the Constitution of the United States to Sarah. If not the whole thing, at least the First Amendment. After all, something terrible might happen if Sarah were to swear on a bible to something that is untrue.

P.S.: If you came here wondering who was responsible for coining the term "Talibunny", it wasn't me. I first saw it on Crooks and Liars.