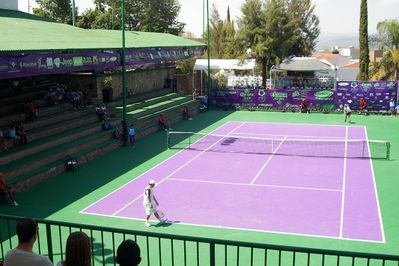 Here's a crib sheet on a vocabulary that's useful when playing tennis in Mexico:

Set is the same.

Let is also the same, but on a serve, it's more common to respond with the number of serves remaining: dos, uno, or doble falta. “Let” is still used when a ball comes onto a court that doesn't belong there, or for some other interruption of a point in progress.

Out: holding up an index finger works, but verbally, it's salió or fuera.

The most common word you'll hear from your partner is cambio, which means, change sides. If he says, fuera, it means, don't hit the ball, because it's going out. I've found that the phrase “I got it” is understood worldwide, but mía!, yo la tengo!, and voy! are correct Spanish terms.

When you spin the racquet to determine who serves (saque), it's arriba (up) or abajo (down).

If you enjoy watching tennis as well as playing it, The Mexican Open in Acapulco at the end of February is well worth going to. It attracts a lot of good players, is at a high-quality facility, and is well run. After that, there's a series of ATP Challenger tournaments close together in geography and time: San Luis Potosí (clay), León (hard), and Guadalajara (hard).