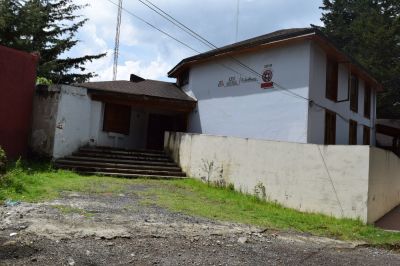 Radio is important in rural and less affluent areas of Mexico. A lot of people don't have computers, smart phones (a lot of areas don't have 4G coverage), or televisions. Mexico doesn't have any equivalent of CBC or NPR; the closest thing to it are some university stations. Community radio stations are a new idea, and their numbers are increasing.

Purépecha, spoken by 124,000 people, is way down the list. It is spoken in the highlands of the State of Michoacán, an area which includes Pátzcuaro, Uruapan, and Zamora. Their radio voice is XEPUR, "The Voice of the Purépecha", located in Cherán.

Cherán is 50 km. north of Uruapan, and 56 km. northwest of Pátzcuaro. It has 16,000 people, most of whom are Purépecha. Cherán attracted some attention in 2011 when the people decided to take action against organized crime and corrupt politicians and police by talking control of their own community. Illegal logging by organized crime was a major problem, so they attacked a busload of illegal loggers, who were armed with automatic weapons, with rocks and fireworks. They switched to an indigenous, consensus-based form of government and replaced the police force with locally controlled autodefensas. During Mexico's 2018 election season, Cherán again attracted attention by declaring all political parties unwelcome in the community.

I visited the XEPUR studio in mid-July 2019, and talked with the news director, Jesús Morales. He told me that the station was founded on October 2, 1982. Because it is subject to Federal government funding and the whims of changing governments and bureaucratic turnover, there has been some friction over the years. Surprisingly, the main source of contention has not been language, but music, which the Purépechas regard as a very important part of their culture. He mentioned several highly regarded Purépecha composers; Ubaldo Morales Rivera and Daniel Plancarte ("Arriba Pichataro"). Paracho, where most of Mexico's hand-made guitars come from, is nearby, and San Ángel Zurumucapio, a bit further away, is a music hotbed. XEPUR is important because it is the only broadcast outlet for this music. Attempts by higher authorities to keep this music off of XEPUR's playlist have been met with stiff resistance, led by Francisco Elizalde García, a long-time director of the station. He designated May 24 as the National Day of Purépecha Composers.

Morales is the sole employee of the news department, but he has a network of correspondents. He said that the situation with the forests is much better since the 2011 uprising. Unfortunately, the illegal replacement of trees with avocado plantations on communal land is still happening; the autodefensas aren't capable of patrolling all Purépecha territory. XEPUR runs stories about ecology, in order to raise public awareness. He sees the use of herbicides as a big problem; it ruins medicinal plants, and harms animal life, including deer, coyotes, rabbits, wildcats, and roadrunners. Fires, of course, also destroy wildlife.

In closing, Morales emphasized the importance of community radio, and that it should be a higher priority for funding.