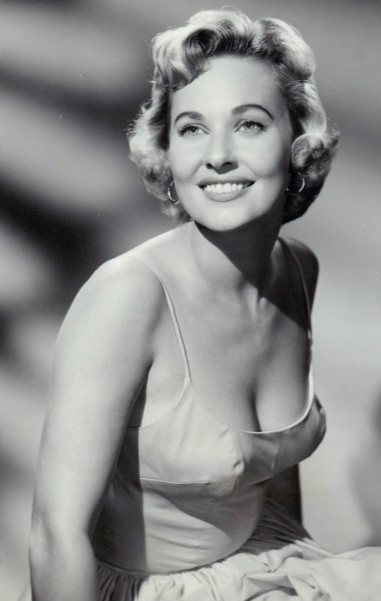 I recently read Eminent Hipsters, and autobiography by Donald Fagen of Steely Dan. I highly recommend it if you are a fan of his music.

Like any music biography, it goes into musical influences. In Fagen's case, there was a major surprise; one of his major influences was the black-and-white TV series Peter Gunn.

"Peter Gunn" aired from 1958 to 1961, and the episodes were a half hour. It was created and partially written by Blake Edwards, who later became famous for the Pink Panther films. It starred Craig Stevens as Peter Gunn, a private detective. The co-star was Lola Albright, who played Edie Hart, a singer in Mother's, a cabaret frequently visited by Gunn. Gunn and Hart had a sexual relationship, unusual for television is those days. Gunn also visited an underground club frequented by beatniks.

Albright was beautiful, and a good actress, but most of all, she was an excellent singer, and that's what takes me to the point of this article. There's music all the way through the series. There would be a band playing whenever Gunn visited Mother's, and Hart often got to do a song. (This was not unusual ca. 1960; for an example, read up on Dorothy Provine.)

All of the original music in the series was composed by Henry Mancini, and performed by the Henry Mancini Orchestra. If you're familiar with Mancini, the first tunes you would probably think of are "The Pink Panther Theme", "Moon River", and "Days of Wine and Roses". Good ones, of course, but Mancini had a jazz background with the Glenn Miller Orchestra, and jazz was a good fit for the film noir atmosphere of "Peter Gunn". One especially remarkable tune that Mancini came up with was the theme music:

Now, the horn playing in this tune is obviously jazz. However, it is in 4/4 time, with an eight-bar melody. It had a beat, but above all, a great bass line. Fagen thought it was great, and justifiably so. He had a jazz trio when he was a teenager, but when he went to Bard College, he quickly figured out that he could become a Big Man on Campus by playing rock and roll. This eventually led to Steely Dan, songs like "Deacon Blues", "Pretzel Logic", "The Royal Scam", "Babylon Sisters", and Fagen's solo albums.

Fagen and Steely Dan didn't invent jazz rock. I would nominate Blood, Sweat, and Tears for that distinction, with the first three Chicago albums coming not long after. However, Fagen is the first jazz rock musician I know of to acknowledge Mancini as an influence.

Why is this important? Because, whenever musicologists gather, the origins of rock and roll are always a topic. They always say blues, country, and gospel were rock music's predecessors. The point here is that jazz was an influence, too. Mancini died in 1994; I wonder if anyone ever told him that he was an influence on Steely Dan.