Big Trees Not Big Stumps: 25 years of campaigning to save wilderness with the Wilderness Committee, by Paul George. 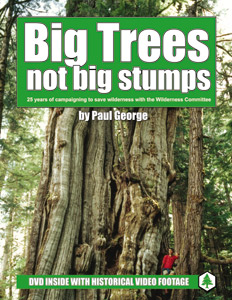 This is a really thick book. That's why this review wasn't written until several months after its publication; it took me two months to read it. Even so, to bring it down to 463 pages, a lot of text had to be snipped from earlier drafts.

The book is officially described as a history of the Western Canada Wilderness Committee, of which the author, Paul George, was a co-founder. If you have lived in British Columbia for a long time, reading this book will bring back a lot of events that you had forgotten about. Paul's documentation of the long fight over Clayoquot Sound and the industry and government-sanctioned violence in the Elaho Valley (remember Premier Glen Clark referring to environmentalists as “enemies of B.C.”?) is especially useful. In reading all this history, you can't help but notice a general change in the public attitude about wilderness preservation and other issues, such as preservation of wildlife habitat, that go with it. When Paul, Adriane Carr. Elizabeth May, the late Colleen McCrory, and Thom Henley were working to preserve South Moresby (it wasn't commonly referred to as Haida Gwaii at the time) the idea of creating a park for purposes other than providing places for parking RV's and camping trailers, and doing some hiking, was a new one. Over several years, the South Moresby proponents had to sell several relatively new ideas. For recreational values, South Moresby would become a paradise for kayakers, but there was also the preservation of unique marine, plant, and animal life, and preservation of an important part of Haida culture. The Wilderness Committee also had to sell the idea trees have values other than producing two-by-fours.

The book is about a lot more than history, however. It could serve as a training manual for community activism. Scattered throughout the book are words of useful advice, in boldface. for example, “Educational materials are most effective when they are focused on one campaign issue, not a bunch of them 'cobbled' together.” There are abundant examples of campaign efforts that worked, as well as ones that didn't, and reasons why are provided.

It's also about people. Ken Wu, Andrea Reimer, and Adriane Carr get a lot of mileage, as does Joe Foy, Ken Lay, and the late Randy Stoltmann.

There are also things in this book that will make you laugh. Some of them come at the expense of Premier Bill Vander Zalm; Adriane Carr had to explain to him what a "watershed" is. The book also has a lot of pictures, and it comes with a DVD.

Taken as a whole, this book tells about recent British Columbia history from a unique perspective. Buy a copy for the environmentalist on your Christmas list.

I went to a basketball game at Douglas College in New Westminster this morning, and had the privilege of seeing Bol Kong, a sophomore from Vancouver, in action. After the game was over, I looked at The Province. A picture of the very same Bol Kong was on the back page, and inside was this article, by Howard Tsumura: Unstoppable Vancouver basketballer mired in red tape.

The article says that when Kong was a senior at Saint George's Secondary School, after scoring 32 points in a game, players from the opposing team lined up after the game was over to get his autograph. Close to 200 US prep schools, junior colleges, and universities have expressed an interest in having Kong play for them; he's even caught the attention of the Boston Celtics. Current US "homeland security" policy, however, prevents him from going to Bellingham to buy a pair of basketball shoes.

Kong's problem is, he was born in Sudan. He's lived in Canada since he was seven years old, and has landed immigrant status in Canada. Maybe he should try convincing the US authorities that he's Mexican.

According to a Canadian Press news story on July 16, a Conference Board of Canada story paid for by the Federal government revealed that Canadian professionals traveling to the US for business purposes are frequently held up or harassed by US Customs; see Border woes persist. (You won't find this report on the Conference Board of Canada site.) This happens in spite of NAFTA and mutual recognition agreements, and also happens even when all the required paperwork has been completed in advance.

So, please explain to me again how Canadians benefit from NAFTA.

The US Department of Homeland Security is at it again. Elsewhere in this blog (The Bush Administration embraces Maoism), you'll find the story of how Andrew Feldmar was denied entry to the US because he admitted to taking LSD 40 years ago.

Feldmar was turned back when he was going to the SeaTac Airport to pick up some friends. In the case of Glendene Grant, she was going to Las Vegas to meet with police, and speak at a CrimeStoppers event, about her daughter, Jessie Foster, who went missing over a year ago, and has apparently been taken into the white slave trade.

Grant's story is told in the June 3, 2007 Province, Mother's hunt for missing daughter blocked at border. The author is Lena Sin, who also drew attention to the Feldmar case. To summarize, Grant was convicted of possession of marijuana and cocaine in 1986. Her daughter, Jessie, went to Las Vegas in May, 2005, and met and moved in with a rich man, Peter Todd. She disappeared in March, 2006, and at that time, she was working for an escort agency. The Las Vegas police have declared the case cold, so Grant has gone to work with CrimeStoppers and the Anti-Trafficking League Against Slavery (phone: (702) 828-0237) to keep the investigation going.

I'm sure that people in the U.S. who are reading this feel much safer with the knowledge that their government is keeping them safe from the likes of Glendene Grant and Andrew Feldmar. If Jessie Foster is currently a white slave, her captors feel safer, too. To repeat a quote from Keith Olbermann, addressed to the Bush Administration, that appears elsewhere on this site, “The distance of history will recognize that the threat this generation of Americans needed to take seriously... was you.”

It says elsewhere on this site (Satan, the War in Iraq, and Richard Land) that "the Bush administration has become the very thing that Bush and his supporters profess to oppose." Another piece of evidence that the Neo-Cons are actually Maoists turned up in the May 18 issue of The Province: Beware what you reveal of your past, written by Lena Sin. (If you don't have a Province subscription, you can read a PDF of the story here.)

Ms. Sin told the story of Andrew Feldmar, who was denied entry to the United States in August, 2006. This happened because an employee of the US Department of Homeland Security (that has a nice 1984 ring to it) Googled "Andrew Feldmar", and came across Entheogens and Psychotherapy, published in Janus Head, a journal “devoted to maintaining an attitude of respect and openness to the various manifestations of truth in human experience”, published in Amherst, NY. Feldmar revealed in this article that he had taken LSD 40 years ago.

This created a big problem for Feldmar; admitted drug users are inadmissible to the United States. (This restriction doesn't apply to President (and cocaine snorter) George W. Bush, because he was conveniently born there.) Feldmar was held up for four hours, had his car searched, was asked to sign a statement verifying that he used drugs (statements of self-criticism are a common practice in Maoist China), and sent home. He is now barred from any future visits to the US, despite the fact that he has two children who live there.

Among the multiple ironies in this is, Feldmar spent his early childhood in Nazi-occupied Hungary, and his parents were sent to Auschwitz. The United States has become yet another regime of bullies, a place where people are told to sign things, “or else”.

An article on this same subject appeared in The Tyee a month earlier: LSD as Therapy? Write about It, Get Barred from US, by Linda Solomon.

Will Stewart is the founder of techsideline.com, a resource about Virginia Tech sports (mostly football and basketball) that was one of my inspirations for setting up http://tbirdbaseball.net/.

Will wrote a piece on April 18 that I think is excellent, especially because it comes from somebody on the ground in Blacksburg. Here's the link: The Final Emotion. You'll find a huge difference between the point of view expressed here and the talking-head idiocy that Keith Olbermann drew attention to in "World’s Worst Heartless Wingnuts".