Rafe Mair's 13th book can be classified as an autobiography. It covers his life up to the University of British Columbia Law School. However, after the first 150 pages, the chapters in this book alternate between autobiographical ones and ones on topics that Rafe feels that the readers should know about.

The chapters in the latter category are especially good ones. “You've gotta talk salmon” is a concise explanation of the different species of salmon (and some fish incorrectly identified as salmon) in British Columbia waters and the various dams, built and unbuilt, over the years. “Canadian bombshell: the forgotten case of Igor Gouzenko” documents some shameful actions by Prime Minister Mackenzie King. “Whither the book?” and “The electronic book arrives” are essays on the merits of bookstores, paper books, and Kindles.

Readers of this book who were born in or moved to Vancouver since 1990 will not recognize a lot of the Vancouver that is described, especially if they live outside of the upscale west side. Multiculturalism has existed in Vancouver for a long time, but during Rafe's younger years, Irish were “Micks”, Chinese were “Chinks”, and one day in 1942, the Japanese just disappeared. These minority groups had their distinct neighbourhoods, and they weren't in Rafe's west side.

The title of this book is totally appropriate. Some people who travel go to the beach, visit museums, birdwatch, or sample the local cuisine. Ginny NiCarthy, who lives in Seattle, got into traveling later on in life, and started doing a special type of “adventure travel”; visiting places that are in the news, talking with the local people, and trying to find out what's really going on.

A particular emphasis is the victims of the “collateral damage” that you hear about in the news stories. NiCarthy makes it clear that bombing by the US is doing far more human damage than most people realize, and is not winning any friends. Her credentials as an opponent of the US government are very good. She served two months in prison for a protest at a Trident base, and later refused to pay taxes to support the invasion of Iraq.

She visited Iraq in October, 2002, five months before the invasion. When you listen to discussions of foreign policy, you'll often hear the phrase, “sanctions don't work.” NiCarthy didn't mention what effect (if any) the sanctions in Iraq had on any policies of the Iraqi government, but the effect on Iraq's people was devastating; schools without electricity, hospitals with no phones, water, or medical instruments. This chapter also discussed the long and short-term effects of the 1991 Operation Desert Storm. One of them was the US Army's use of depleted uranium to make artillery shells more effective, and tanks less vulnerable. Eleven years later, there were areas of Iraq where the radiation level was more than one thousand times normal. One of the consequences is, the rate children born with birth defects went from 11 per 100,000 to 116 per 100,000.

John Scherber has lived in San Miguel de Allende since 2007. He has written 17 fiction books, and this is his third non-fiction. This book is a series of interviews of extranjeros who have settled permanently in Mexico. Scherber asked a lot of good questions, and got a lot of good answers.

At first glance, the “off the beaten path” in the title might seem misleading, unless your idea of “off the beaten path” is “outside of Puerta Vallarta, Cancun, and Cabo San Lucas”. Two of Scherber's destinations, Mineral de Pozos and San Luis de la Paz, are only a few kilometers away from San Miguel de Allende, a major Gringo colony. Morelia, Puebla, and Oaxaca are big cities that attract a lot of tourists, and Pátzcuaro is also a major tourist destination. Zacatecas is off the beaten path, however, and also included in this book are Erongarícuaro (usually shortened to Eronga) near Pátzcuaro, and Tlacolula de Matamoros in the State of Oaxaca. I thought that these three places were the most interesting parts of the book.

Scherber has several common topics, such as, “how often do you get visits from family members?” and “why did you choose this town?” The cost of living comes up in some interviews, and not in others. Health care, an important topic for retirees, didn't come up very often. The interviewees come from a wide variety of backgrounds, but there are several common threads in their testimonies. One is that they don't want to alter the culture of the place that they have moved into. (I feel the same way.) When Scherber asks, “do you feel safe here?” the response was always “yes”, except for one incident where an interviewee was chased out of San Pedro Chenalho in Chiapas by a group of people with two-by-fours. Well, after all, there was a civil war going on in Chiapas at the time. Another common thread is, the interviewees hang out mostly with Mexicans, instead of other expatriates, and this is the case even in Oaxaca, which has an English-language library that serves as a gathering place.

Read more: Book Review: Into the Heart of Mexico: Expatriates Find Themselves Off the Beaten Path
book review

The place where you get the really good view, though, is Cortez Pass, which is between Popocatépetl and Iztaccíhuatl, a dormant volcano north of Popocatépetl. The two peaks are included in the Izta-Popo Zoquiapan National Park. The road there requires a Jeep-style vehicle. If you don't have one, you might be able to arrange for someone in the towns mentioned above to give you a ride up and back. Problem is, this will require some lead time. Another possibililty is Gozamex, which runs a bus tour from Puebla to Cortez Pass. It costs 1,400 pesos, takes nine hours, and requires at least two people. Keep in mind that, like all mountains of this size, Popocatépetl often has a cloud cover. 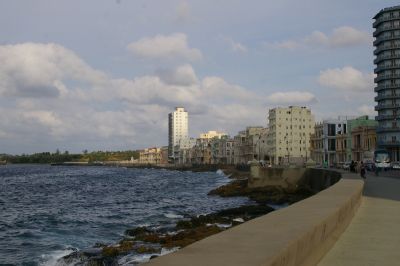 I made a visit to Cuba in January, 2015. I relied heavily on Lonely Planet: Cuba. This publication is a bit too friendly to the current government of Cuba, so I'm taking the trouble here to provide my version of The Real Story.

First, I did not go to Varadero or any of the all-inclusive resorts. I didn't spend a single night in a regular hotel. This is not what the government wants. They want to transport you from the airport to one of the all-inclusives, and transport you back to the airport a week later. That way, you have near-zero contact with ordinary Cubans, and the government gets nearly all of your money. That's just the way they want it.

If you want to be an independent traveler like I was, the first issue you're going to have to deal with is transportation. Want to ride buses with ordinary Cubans? Forget it. Those buses require an extensive reservation process. And actually, the common means of inter-city transportation for Cubans is a truck equipped with seats, the sort of vehicle used for transporting prisoners (or cows or pigs) in other countries. Cuba has some passenger trains; I considered taking one for the last leg of my trip, and was strongly discouraged from doing so. 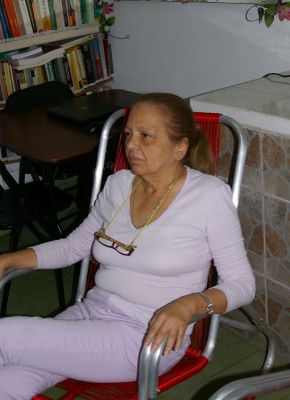 Marta Beatriz Roque is the founder of the Cuban Institute of Independent Economists, and a prominent Cuban dissident who has been in and out of prison several times.

Marta Beatriz Roque: I told the Congressmen (Senators and Representatives) that whether I agreed or not [with the Obama announcement on diplomatic recognition], the decision was made, but a retreat from the recent actions of the Obama Administration would be very painful for the Cuban people, so Congress has to be careful on this issue.

RB: One misconception I had about Cuba was that it has a shortage of tourists. Actually, there are a lot of them. And, Havana's better hotels charge $150 to $200 per night, and the all-inclusive resorts charge around $300 per night. Where is all this money going?

MBR: I would be unfair if I said, “into the pockets of Castro”, because I am not aware that this is happening, but I can say that is not used to improve the people's livelihood, which is becoming worse. However, family members of the regime travel like millionaires, as seen with Fidel Castro's son's involvement in expensive golf tournaments and fishing derbies. Most Cubans do not know what golf is, and haven't eaten fish for many years. 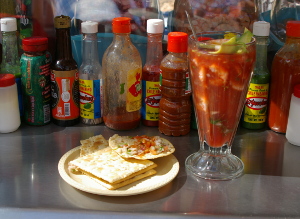 Now that I've lived in Mexico for over two years, here's some culinary discoveries I've made. 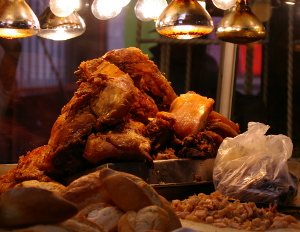 Cerdo (pork): There's something that they do when they cook pork that makes it melt in your mouth. I've heard that they use lard, which can't possibly be good for you. My preferred method of ingestion is in a torta (Mexican sandwich). This yummy picture was taken at the Mercado Hidalgo in Guanajuato. 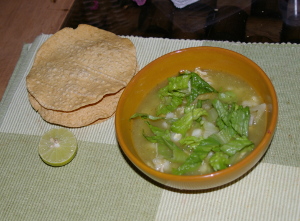 Pozole verde: Pozole is actually hominy, but what we're talking about here is a soup that includes (usually) chicken, hominy, and some unknown spices, garnished with onions, lettuce, and radishes. It never tastes the same way twice, even when prepared by the same cook. There's also pozole rojo, which I don't like as much, and pozole blanco, which I haven't tried yet. 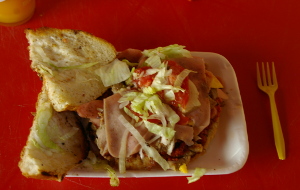 Torta Cubana: Something that you order if you're especially hungry. You could call it a torta with everything on it; chorizo, ham, slices of hot dog, yellow cheese, lettuce, and tomato. Incidentally, I recently spent two weeks in Cuba, and didn't see torta cubana on a menu once. This picture was taken at Tortas Mi Lugar at Positos 11 in Guanajuato.

Elote (corn on the cob): As sold by street vendors, it's corn with grated cheese, mayonnaise, chili powder, and lemon. You often get a choice of medium or asado (well-done). You can also choose whether you want an actual cob on a stick, or de-cobbed corn in a foam cup (vaso). I've always taken the vaso option, because I don't want to wear it. I also tell them to hold the mayonnaise. 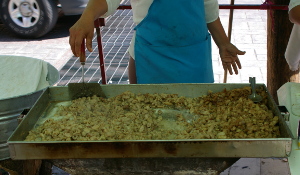 Tripe: Not something worth writing home about, but it's listed here because there's a funny story that goes with it. The first time I tried it, I saw it being deep-fried by a sidewalk vendor, and my reaction was “umm, calamari; I love calamari.” Well, I learned about three days later that tripe isn't calamari; it's sections of cow intestines. Had I known this, I never would have tried it. Having tried it once, I like it OK. However, you never see tripe on a menu in a restaurant. It's always sold by sidewalk vendors; if you see it cooked before your very eyes, you know that it's cooked sufficiently. This picture was taken at Embajadores Park in Guanajuato.