My trip to the Northwest was originally planned for July 2020. I bought a Mexico City to Vancouver ticket from Aeromexico in February 2020, which was before the pandemic started. I postponed it a couple of times. Then, Aeromexico told me that I had to make a specific booking by the end of April 2021, So I booked it for September, and for the duration of 40 days, in case a quarantine was required. Three months later, the news came that visitors to Canada who were fully vaccinated would no longer be required to quarantine, so I thought, "good".

A few days prior to the flight, I started making the required preparations. One of them was completing the online ArriveCAN form, and that gave me the first sign of trouble. One of the questions was, what type of vaccination did you receive? One of the entries on the drop-down was Sinovac, which was the vaccination I got. I selected it, and was then informed that Sinovac is not one of the vaccinations approved by the Canadian government.

I got the two Sinovac jabs in March and April. It's important to understand (and the Health Canada employees that I dealt with either didn't understand, or, more likely, didn't care) that I had no choice in this matter. I showed up to receive the vaccinations at a certain time and place, and had to accept whichever vaccination was being dispensed at that time and place. At that time, Mexico was also dispensing the Pfizer and AstraZeneca vaccines, which do have Canadian approval, and it was the equivalent of a dice roll that I ended up with the unapproved one. There were two chances in three that I would have gotten an Canadian-approved one.

On to the plane flight on September 11. It arrived at 9:15 PM. After waiting in line in Customs for an hour, I showed the Customs guy my passport, the official Mexican government-issued vaccination certificate, the result of the PCR test I had taken the previous day (which, of course, was negative), and the ArriveCAN registration number. He told me that I had to see one of the Health Canada employees that was wearing a red vest. She gave me the bad news: I would have to quarantine for 14 days.
The issue was, where? My idea was, I had a reservation at an inexpensive hotel in Kamloops a few days later. So, I phoned this place. (This is a good argument for the indispensability of cell phones.) First, I apologized profusely for calling him at 11 PM. Then I said that there was a change in plans, and could I quarantine there? He said that his policy was a maximum stay of five days. I handed the phone to the woman in the red vest so that they could discuss whether his place was acceptable. The result was, the woman in the red vest insisted that the 14 days had to be spent in one place. She was insisting that I say in Health Canada's facility. So, I said, how much would that cost? The answer was, nothing. (Note that if she had agreed to my Kamloops idea, Canada's taxpayers would not have been paying for my quarantine.)

My cover of a song by Robbie Robertson.

Videographer Angela Matthews was my house/cat sitter for the month of October, 2019. She made this great video.

I recorded and edited this. Includes Spanish subtitles/subtitulo en español.

A documentary film about Volcán de Pacaya and Volcán de Fuego, including video footage of the latter. 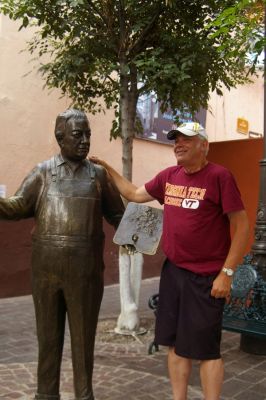 I retired in February, 2012, and now live in Guanajuato, in Mexico's central highlands. You can read all about the place in Wikipedia.

I've put up a couple of blog postings about Mexico here and here. There's more on the way.

We have 5 guests and no members online