No, I didn't go to Washington on September 24. However, Lynn Moyers, a friend of mine from university days, was there, and here is his first-hand account:

From the Front Lines: My report on the Anti-war protest in DC, 24 Sep 05 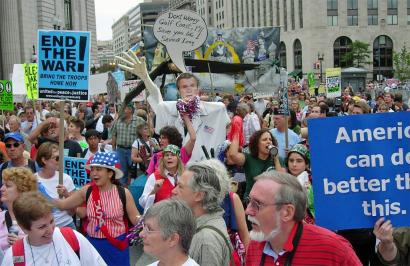 Like many others who think the war on Iraq is wrong, I went to Washington DC this weekend to express my displeasure. Being among thousands of similar mind was a stimulating experience and one that helped renew my faith in our country.

The day was warm and overcast, typical for the central East Coast this time of year. I started the day from Centreville, a northern Virginia suburb. I was staying with my friend Bernie who accompanied me downtown as an observer. We rode the Metro light rail system into town. The system was on time, clean, and efficient. We exited at Federal Square station and headed out thru the Ronald Reagan office complex to the grounds of the Washington Monument.

We arrived about 10:15 and found a crowd of thousands already gathered. There were about 50 vendors and organizations scattered around the Monument grounds and on the Ellipse in front of the White House, mostly in tents. The atmosphere was calm but serious. Lots of people in costumes and protest signs everywhere. Bernie and I wandered around for an hour or so, looking at the people and visiting all the information and vendor booths. Have never seen so many ways of saying "We don't like the people in charge and want them to go away".

The pre-rally speeches started around 11:15. We walked over to the Ellipse grounds and listened to speaker after speaker fire up the rapidly swelling crowd. There were several members of Congress, labor leaders, and activist group representatives speaking. The speakers that got the most attention and did the best job of energizing the crowd were Cindy Sheehan, the lady who camped out at Bush's ranch, and Wesley Clark, retired Army general.

During the less-inspiring speeches I was talking w/some of the people around me. The most interesting were a couple of evacuees from NOLA that left the day before the Katrina hit. 2 things they said really caught my attention. The first was the story about their neighbors' house. The flood waters got up over the wood floors on the first floor of their house. When the flood waters receded, they found the waters had stripped the finish from the floors! Now that's some nasty water.

The other story was their belief that the Industrial Canal, the 17th Street Canal, and the 9th Street Canal were all purposely breached to prevent the flooding of rich people's homes. The water level peaked 2-3 feet below the top of the levees so the levees were not undermined by water flowing over the top as we were told by the press. They also believed the Industrial Canal was purposely breached during Rita to flood the same areas again. What a better way to keep people out than to keep flooding the areas they try to occupy.

The march was supposed to start at 12:30 but didn't get moving until around 1:15pm. Bernie and I managed to circle around the huge throng and work our way up near the front of the march. The crowd was jam-packed and it was a non-trivial exercise to work our way thru the crowd. We got separated about 1:00, so I headed off with the march while Bernie headed home to watch VA Tech football. I was in the first 10,000 or so to start moving at around 1:15. We started north up 14th street in a huge throng. I was behind several veterans groups that were marching together. After chanting and marching with them for about 15 minutes, I got past them and broke into relatively clear area.

Turning left (west) onto New York Avenue, I found the street almost totally blocked. NY Ave passes by the Treasury Dept and the North side of the White House. There were large groups of people gathered here, often dressed alike with signs and banners identifying them. Most were aiming their protest at the White House, railing against what it represents. It took me a good 15 minutes to gently work my way thru the crowd backed up at Treasury to reach the WH. Hung around for a few minutes talking w/people and soaking up the ambiance. Sprinkled rain for a few minutes. Was fun to watch all the weenies pull out their umbrellas and rain coats.

Lots of organized protest at the WH. Chanting and singing, there were a number of viewpoints represented. The amazing thing was they weren't shouting over each other; the groups were taking turns making their voices heard and on occasion the thousands in the area joined in common chants. The most frequent one was "This is what Democracy looks like."

Moving on past the WH, the march thinned out dramatically. The short spur of 17th St (north) only had a few dozen people, maybe a hundred or so. Seems like everyone stopped at the WH and just stayed there. Wished the 2 screaming young women with the bullhorns had stayed there. Was interesting and bit spooky to walk down a major street in DC with no traffic and almost no people. Same situation on H Street going East. Could only see a few hundred people in front of me. Walked mostly alone thru here.

Turning south onto 14th, I saw large groups of people walking along and the Washington Monument off in the distance. Walked rather slowly down this street thinking about what it was like to be part of history and the sacrifice people made to come here and make their voices heard. I had to talked to and seen people from all over the US, several foreign countries, all manner of political and religious persuasions, united by a common cause. Made me proud to be an American and realized how fortunate I am to be one.

Got to see the crowd still going North on 15th as I was going south. They were packed in tighter than when I went thru earlier and showed no signs of diminishing in number. That's when I realized how big the protest really was.

A little over halfway thru the route, I turned East onto Pennsylvania Avenue. There were a few spectators along the way, mostly guys in business suits with looks of curiosity on their faces. The were groups of 10 to 20 people occupying the street in front of me. Still that spooky feeling of walking down the middle of a 7-lane street virtually alone. Lots of time for reflection; feeling good about what were doing.

So far I had only seen a small handful of counter protesters and only in 2 spots. They were all religious wackos telling us we were violating God's laws by protesting, waving their Bibles and screaming at us. Didn't remember anything from my readings of the Bible that told me protesting was wrong.

That changed when we turned south onto 9th Street and walked past the Justice Building. There were about 150 Repubs behind a barrier fence and screened off by cops. Seems appropriate to keep Repubs behind bars. That's where a lot of their compatriots are winding up these days. These people were calling us Communists, Traitors, unpatriotic; the typical things that small minded people call others they disagree with. Interesting to compare the groups. Marchers were a mixed group, racially, age-wise, and in gender. The counter protesters were nearly all white, mostly fat middle-aged men. Only saw a few women and 2 token Arabs. Not a black person among them. Lots of screaming going on from both sides. I watched for a few minutes, then moved on. Neither side was listening to the other, so the whole thing seemed rather pointless. Protesters outnumbered the counter protesters by about 4 to 1 at this spot.

Turned west onto Constitution Ave. and saw a large crowd in front of me. These were some of the first people to finish the march. I finished a bit after 3pm and watched the groups just starting out for a while. I estimated 25K-30K people still to start when I had finished. I suspect it was 6pm or after until the marchers all finished the route.

I chose not to attend the concert afterward, as I was rather "peopled out" at this point. Went back to Federal Square and hopped a train back to Vienna. Got to Bernie's house in time to watch the last 3 quarters of the VA Tech/GA Tech game. (Hokies kicked butt!).

Everyone I saw was well behaved, earnest and forthright in their beliefs. Even with the large police presence I didn't see the cops harass anyone and didn't see anyone harass the cops. Didn't see any fights, no disagreements except with a few counter protesters and only smelled pot smoke once. There were a large number of women and children at the march which surprised me. Saw people from nearly every religious persuasion and big groups of teachers and union members. There were a lot more 20-35 year olds than I expected, as that generation is supposedly disinterested and not involved.

I thought the march was a huge success and am thankful to all who sacrificed their time, money, and talent to make it happen.