At this year's US Open tennis tournament, the National Tennis Center on Long Island, New York was renamed to Billie Jean King National Tennis Center. I think that this is totally inappropriate, and not just because it waters down the recognition extended to the late Arthur Ashe when the stadium on the same site was named after him. And no, I'm not sorry for being a party-pooper.

"The Philip Morris executives I know... are enlightened people who understand and acknowledge the possible hazards of smoking." Billie Jean King, December 2,1993 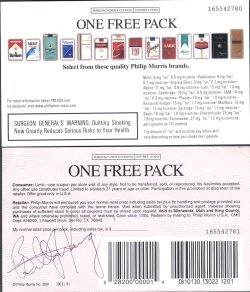 King was a member of the Philip Morris (renamed to Altria) board of directors from 1999 through 2003. Philip Morris is the world's largest tobacco company, and the World Health Organization estimates that cigarettes cause over four million premature deaths each year. No, smoking is not a possible hazard, and King has an ethical blind spot about cigarettes that you could drive a truck through. Click here to view a “free pack” coupon that she autographed in 2001.

The number of women who smoke increased dramatically during the 1970's, and this increase is attributable to one of Philip Morris' most successful ad campaigns: Virginia Slims and “You've come a long way, baby.” One the elements of this ad campaign was the Virginia Slims tennis tour, and King, along with Martina Navratilova, was an enthusiastic promoter of this tour.

If you don't see the hypocrisy of promoting tennis as an exercise activity and a grossly unhealthy activity like smoking at the same time, I'll make one more try. King is regarded as an icon by many feminists for publicly acknowledging her bisexuality, as well as for having an abortion in 1971. Well, actually, she didn't have much choice in the “public acknowledgment” part, because she was the target of a palimony suit by Marilyn Barnett. She apparently hid her sexual preference for women from her husband, Larry King, when they married in 1965. (They divorced in 1985.)

Philip Morris/Altria's record on this sort of thing is mixed. They certainly like to sell cigarettes to women and gays. However, they have a lot of friends in Washington. (If they didn't, they would have been legislated out of business years ago.) One of these friends was Jesse Helms, a senator from North Carolina who used the Senate floor to say all sorts of unkind things about the “homosexual lifestyle”, and even introduced legislation to prohibit the use of Federal money to combat anti-gay discrimination. Philip Morris did more than contribute several million dollars to Helms' re-election campaigns (thus effectively paying for his microphone); they even gave $200,000 to a dubious charity, the Jesse Helms Citizenship Center. (See From adversary to target market, from the British Medical Journal.)

Helms is only the most blatant example. At the same time that they were buying off King, Philip Morris/Altria was funding many other politicians who are no friends of gays or feminists, such as President George W. Bush and former Vice-President Dan Quayle.

I've written elsewhere about the inappropriateness of connecting the sport of tennis to the tobacco industry; see Canadian Open Tennis Hall of Shame. The “du Maurier Open” and “Players Open” no longer exist. The United States Tennis Association should give the National Tennis Center back to Arthur Ashe.

It's on the news constantly, but what's going on there is so horrible, that I've been having a hard time getting a handle on it.

Glavin also wrote, "You could fairly mark July 2006 as one of the most squalid months in the history of the 'left' in Canada." I'll leave it to you to click the URL in the previous paragraph to find out why. A lot of people aren't going to like some things that Glavin wrote, but it's time for them to take a hard look at themselves in a mirror. No, we are not all Hezbollah.

The Epoch Times has run another article about the use of political prisoners as a source of organs for transplantation. The issue has attracted some attention in Canada. Former Secretary of State for Asia-Pacific David Kilgour and human rights lawyer David Matas want to go to China to investigate the allegations, but are getting the official run-around. Kilgour went to a visa office to apply for a visa, and was told, "I don't deal with visas." The article is China Embassy Dodging Organ Harvesting Probe, Says Ex-MP, by Masha Loftus.

Update on July 7: Here is the report by Kilgore and Matas: http://www.david-kilgour.com/2006/Kilgour-Matas-organ-harvesting-rpt-July6-eng.pdf.
Extensive story in the Epoch Times: Kilgour-Matas Report Confirms Organ Harvesting in China

This story falls into the "you learn something new every day" category. I was listening to airamericaradio.com today, which is something I do pretty often. The subject of discussion was former Florida Secretary of State Katherine Harris, who is currently running for the Senate, and headed for a dismal defeat. Harris gained considerable notoriety for her role in stealing the 2000 presidential election, although, in the interest of fairness and balance, I'll point out that if Gore had managed to carry his home state of Tennessee, what happened in Florida wouldn't have mattered.

It seems that Harris has been going around saying that Florida's Democrat members of Congress are telling her privately that they hope that she wins. This claim is being dismissed as complete nonsense, and Air America Radio commentator Sam Seder said that Harris has "jumped the shark".

My reaction was to start wondering where the expression "jumped the shark" came from. Thanks to Google, I was able to find out in about a minute.

It's a Hollywood term, and it originated with the Happy Days sitcom. This show deteriorated badly during the last couple of years that it was on the air, and during this period, the character Fonzie (a greaser played by Henry Winkler) jumped over a shark while water skiing. The expression "jumped the shark" came to apply to the point where a TV series has been on too long, and gotten stale or silly. The best example that comes to mind is the last season of Ally McBeal.

There's a jumptheshark.com site which contains viewer evaluations of 2,500 TV shows, and visitors can vote and comment on the moment when their favorite or detested show jumped the shark. This Hour Has 22 Minutes is listed; there are 17 votes for "when Rick Mercer left the show", and 17 for "never jumped". There are 50 voters who say that Desperate Housewives has "never jumped", and 19 for "the second season". There's also a "bait shop" where you can by a book with the title Jump the Shark.

Read more: The origin of "jumped the shark"

After several years of procrastination, and some unsuccessful bids on eBay, I finally got a laptop computer. It's a Dell Latitude, and it came with a 650 mHz processor, a 12 MB hard disk, and 128 MB or memory.

"Only 128 MB of RAM," you say? Hell, I got by for years with a Commodore Amiga that had "only" two MB. I wasn't worried about this because my plan was to install Linux on it, and knew that Linux would work with this configuration.

So, after switching on the power and making sure that I got what I paid for, I proceeded to install RedHat Enterprise Linux Version 4. For a personal-use computer, it might have made more sense to install Xandros or Ubuntu, but I already had a copy of RH Enterprise on hand; somebody gave it to me at the recent LinuxFest in Bellingham. RedHat has another important advantage; it's easy to find RPM's for updated software.

William F. Buckley, Jr., founder of the National Review and highly respected conservative commentator, was recently diagnosed with emphysema at the Mayo Clinic. He has written an excellent essay on this subject. It is reproduced on the Airspace Action on Smoking and Health site, which I maintain, or you can read it at townhall.com.
Read more: William F. Buckley: "Forbid smoking to everyone you care about"

The April 20-26 issue of The Epoch Times has this article on the front page: Good Organs for Sale - but You Have to Hurry, written by Mary Silver.

This article makes a very serious accusation: kidneys, livers, and other organs available for transplants in Chinese hospitals have been involuntarily harvested from practitioners of Falun Gong. Falun Gong (also known as Falun Dafa) is primarily an exercise regime that incorporates some principles of Buddhism. It has become a target of the government of China, primarily because it's something that exists in China that they don't control.

China is a major trading partner of Canada and the United States, and a major supplier of cheap consumer goods. Officials of federal, provincial/state, and municipal governments frequently visit China to drum up more business. The 2008 Olympic Games are to take place in Beijing. If the Chinese government is, as alleged by The Epoch Times, facilitating Nazi Germany-style medical practices, the involvement of North American governments in trade relationships with China is totally inappropriate.

An editorial in the same issue, An Open Letter to Our Colleagues in the Media, calls on the media to allocate an appropriate amount of investigative resources and time and space to this issue. This blog isn't the New York Times or CNN, but I'm willing to give the same weight to atrocities in China as is given to atrocities in Iraq, Rwanda, and elsewhere.